Tomorrow I get to do my first shift as a bay front docent!  There are some California Sea Lions who hang out below one of the docks at the bay here, so the powers that be (which includes many organizations here in Newport) decided to put a docent there to interpret for people.  (In case you're not in on museum lingo-  as I wasn't until somewhat recently- a docent is a person who interprets, and interpreting in this sense is basically talking to people and teaching them stuff in an informal learning setting.)

I will actually need to interpret to people about many things in addition to the sea lions.  We had a great training on Tuesday that also covered seals, whales, seabirds, boats, fishing, and what goes on with the port here.  But, since people go there to see the sea lions I figured I better know them really well, so I've been spending the day learning more about them.  So here ya go!

Awesome fact sheet about California Sea Lions by Dolphin Research Center.  Much information in this post is paraphrased from there.

California Sea Lions
Live from SE Alaska to central Mexico
Population of about 350,000
Swim with their front flippers and steer with the back
Anatomy 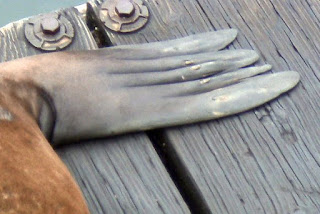 I can't copy it but this is a really cool picture on flicker of a sea lion scratiching its head and you can see the nails and it also shows the incredible flexibility.


Physiology
Behavior
Reproduction
Whew, I did most of that from memory.  At least I will know a good deal about the main attraction tomorrow.  The rest of the information will come with more time, practice, and study.

If you found this useful in any way or have any suggestions please leave a comment by clicking the small comments link! :)  Thanks!
Posted by Julie Nance at 8/03/2012 12:14:00 AM