Thanks to a friend, I've been learning more about cougars (Puma concolor) lately.  I knew a little about them from living in Utah County, where there are cougars in the mountains, and with BYU (nearby university) having the cougar as their mascot.

But in my ongoing quest to learn more (about pretty much everything that interests me) and share with others, I'm offering this information on these majestic animals.  Please also visit my friend's YouTube channel, the Mountain Lion Foundation website for conservation info, and petition to try to prevent them from going extinct here like they have in NE America!

Scientific name: Puma concolor (meaning: cat of one color)
Common names: Cougar, puma, mountain lion, catamount (which may be a contraction of "cat of the mountain"), panther, and more.  It holds the Guinness world record for animal with the most names, with over 40 in English alone. (wikipedia)
Lifespan: 18-20 years
Diet: obligate carnivore (must eat meat to survive), generalist, eats any meat it can catch, from insects to large ungulates

Habitat: Alpine & subalpine habitats, Meadows & fields, Scrub, shrub & brushlands, Deserts, Swamps, marshes & bogs, Forests & woodlands, Canyons & caves
Range: Rocky Mountains, Southwest, Florida, Texas, California, Northwest, Western Canada
The geographic range of the puma is the largest of any terrestrial mammal in the Western Hemisphere (Sunquist and Sunquist 2002), from Canada through the US, Central and South America to the southern tip of Chile (IUCN Red List).  Today, the Mountain Lion has a wider distribution in the Western Hemisphere than any other mammal except Homo sapiens, thriving from lowland tropical forests, swamps, and grassland, to mountain conifer forests, desertscrub, and any location with adequate cover and prey (Source).

Territory: Mountain lions go to great lengths to avoid other creatures, even other lions. Some studies suggest that the territory of a single lion can range upwards of 200 square miles (Wilderness Utah).

Here is an 8 minute video with a nice overview of biology and behavior of the mountain lion.  It compares the "American Lion" with the African Lion, shows their hearing and sight abilities in comparison to humans, their importance in an ecosystem, and a wealth of other basic info on cougars.


They were extirpated from half of their north American range in the early1900s (thanks to a bounty on them which ended in the 1960s). According to IUCN Redlist they are listed as "Least Concern", however, their populations worldwide are declining and in several areas (including Florida) they are critically endangered. The two biggest issues are habitat loss (large cats need a large space) and hunting (both for "sport" and livestock control). 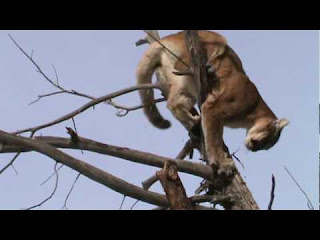 In most states you at least need a license. It is illegal to hunt them in California, but in Texas they have absolutely no protection at all. In all states where hunting is allowed (except Oregon) they are usually treed by hounds. They can then be killed at the hunter's leisure. In nearly every country in their South American range they are protected. US, Mexico and Canada are the last holdouts. There have been only about 20 cougar related fatalities in North America since 1880.

Endangered Status
Two subspecies of the Mountain Lion are on the U.S. Endangered Species List. The Eastern Puma is classified as endangered throughout the eastern U.S., and the Florida Panther is classified as endangered in Florida. Because the Mountain Lion requires isolated or undisturbed game-rich wilderness, it has declined or been exterminated in much of the habitat where it once thrived early in the 20th century.


Its habitat was overtaken by development in many areas, and its main prey, the White-tailed Deer, disappeared over much of its range. For many years, this large wildcat was pursued by bounty hunters and persecuted as a threat to livestock. In recent years, there have been a few sightings of animals or tracks in Canada’s Maritime Provinces and in upper New England, New York State, and elsewhere in the East, but most reports have turned out to be false. Radio-tracking is being used to study the behavior of Florida Panthers, and an office has been established to investigate reports of Eastern Puma sightings in the southern Appalachians. Currently the species is fully protected where rare, and classified as a game animal where abundant (eNature).

Here is a video overview of the issue, made in Oregon so at the end it talks about some statistics for Oregon, but the opening portion is general:


Please sign the petition to protect cougars and their habitat.

Anatomy
Bones
Have to put some bones, I'm a sucker for osteology!  They obviously have a very strong bite force, with a large open space for muscles to pass behind the zygomatic arch, from the site of attachment on the skull, down to the mandible. 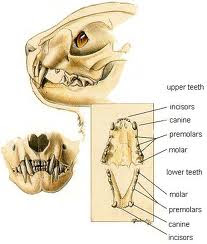 Here is the entire skeleton with many bones labeled:

Muscles
Labels only partially visible, but this is just such a beautiful drawing I had to include it.

Physiology and Behavior
(This section taken from wikipedia, as you can see by the hyperlinks...sorry.)  Despite its size, it is not typically classified among the "big cats", as it cannot roar, lacking the specialized larynx and hyoid apparatus of Panthera


Cougars have large paws and proportionally the largest hind legs in the cat family.[35] This physique allows it great leaping and short-sprint ability. Cougars can jump 18 feet (5.5 meters) from the ground into a tree, and they have been known to jump 20 feet (6.1 meters) up or down a hillside. [46] The cougar can run as fast as 55 to 72 km/h (35 to 45 mi/h),[47] but is best adapted for short, powerful sprints rather than long chases. It is adept at climbing, which allows it to evade canine competitors. Although it is not strongly associated with water, it can swim.

Investigation in Yellowstone National Park showed that elk, followed by mule deer, were the cougar's primary targets; the prey base is shared with the park's gray wolves, with whom the cougar competes for resources.[50] Another study on winter kills (November–April) in Alberta showed that ungulates accounted for greater than 99% of the cougar diet.

Though capable of sprinting, the cougar is typically an ambush predator. It stalks through brush and trees, across ledges, or other covered spots, before delivering a powerful leap onto the back of its prey and a suffocating neck bite. The cougar is capable of breaking the neck of some of its smaller prey with a strong bite and momentum bearing the animal to the ground.[40]


Kills are generally estimated at around one large ungulate every two weeks. The period shrinks for females raising young, and may be as short as one kill every three days when cubs are nearly mature at around 15 months.[35] The cat drags a kill to a preferred spot, covers it with brush, and returns to feed over a period of days. It is generally reported that the cougar is a non-scavenger and will rarely consume prey it has not killed; but deer carcasses left exposed for study were scavenged by cougars in California, suggesting more opportunistic behavior.

Reproduction
Males set up territories that overlap several females.  They typically mate between December and March, and 2-3 cubs are born after a 90-95 day gestation.
Cubs are born with a spotted coat, but the spots fade and usually disappear as the young become adults.  Cubs' eyes open at about 10 days, at which time their ears also unfold, teeth first erupt, and they begin playing (Encyclopedia of Life).

Cubs nurse for 3 or 4 months, but begin to eat meat as early as 6 weeks of age. Young cats become independent when they are about 2 years old, and littermates stay together for a few months after leaving their mother (Hogle Zoo).

Again, please visit my friend's YouTube channel, the Mountain Lion Foundation website for conservation info, and sign the petition to protect pumas and their habitat!  It's not too late to protect these animals if people act now.  Let's not wait until it IS too late.  Thank you.


Thanks to my friend PumawithaPC for inspiring this post and caring so passionately about the puma.  I'm glad I had the chance to research Puma concolor and learn more about these magnificent animals.  Remember to sign the petition!

Thank you for reading.  Please comment to let me know what you found useful or interesting!  Thanks for visiting Bio Geo Nerd!