Today is the 1 year Anniversary of Bio Geo Nerd!  Now that is an anniversary I can get excited about. :)  And, this post marks a momentous milestone....(drumroll)......

:D  Happy Dance...
So I had a rough average of 2 posts per week for a year, and it's been very fun.  Obviously I had some times that were busier than others for the blog, and times when the busy-ness of life prevented me from posting very much.  The viewership of the blog had a very slow start and has begun to expand greatly, going from 20,000 hits just a couple months ago, to now almost 45,000.

Year in Review
Here is a review of some of my favorite pictures from my favorite posts.  I had such a blast learning about these topics and then creating the posts about them.  Fond memories. :) 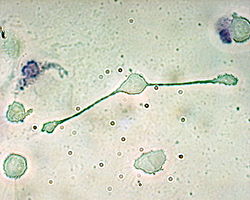 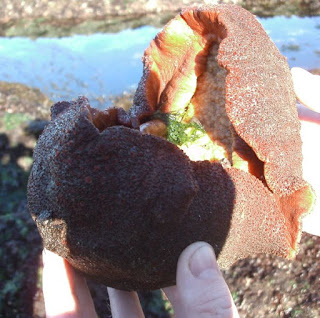 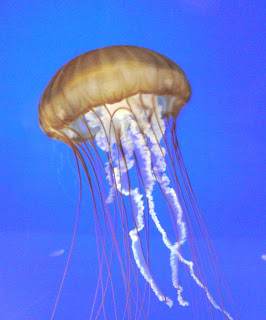 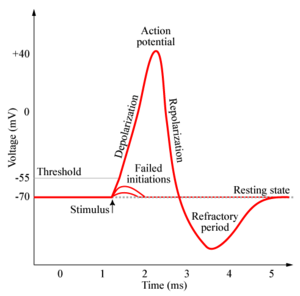 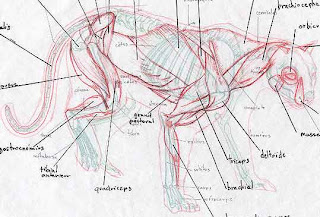 I love physiology.  I have been telling myself that for almost a year now. :)  It began as a positive affirmation in order to do better on the weekly quizzes and tests.  But it has also become an absolute truth.  I love learning about the human body and how it works.

Please see the following posts that are tagged as Physiology:
http://biogeonerd.blogspot.com/search/label/physiology

I love getting to tutor the subject and hope to be able to flesh out and add more Physiology posts as I have time. (Time has been very scarce this semester, so hopefully I can do this more in the near future, perhaps over Christmas break.)  Thanks for visiting!  Please comment!
Posted by Julie Nance at 11/19/2012 01:32:00 PM No comments:

The other factor is Oxygen.  But what is the main purpose of oxygen that we need?  It ties in to metabolism.  Oxygen is simply needed as the "final electron acceptor".

This post was originally written in September, and I am just now publishing it

Bacteria are such little buggers.  I have some living in my sinuses at the moment and they seem to be unresponsive to Penicillin.  I hope I'm not carrying a resistant strain.  It's day 3 so we'll know soon.  Or perhaps I have a virus.  I just learned from the CDC website that most sinus infections are viruses.  I hope my doctor knows what he's doing.

So, in honor of this disgusting sickness that has been cramping my life for a couple weeks now, I'm doing this post on Bacteria.  They are very annoying when they make you sick.  But they are also quite amazing.  The very fact that something so tiny can cause such big problems is incredible in its own right.

See my post on leukocytes to learn about how the body fights off the bacteria who are causing our body problems.  (There are also a lot of bacteria which are beneficial.)


Good Bacteria
Beneficial bacteria are very linked to digestive health.  Anyone who has been on an antibiotic only to get digestive problems afterward knows what I'm talking about.

The Giant Pacific Octopus is an amazing animal.  Here is the internal anatomy:

To watch an octopus in action, HMSC's Octo Cam:
http://hmsc.oregonstate.edu/visitor/octocam

My favorite new website on cephalopods, which I have yet to spend the hours and days necessary to give justice to:

Periodic Table of The Cupcakes

Today the Chemistry Club had these for sale to make money for the club.  Obviously there are some missing due to previous sales, so the table is not complete. 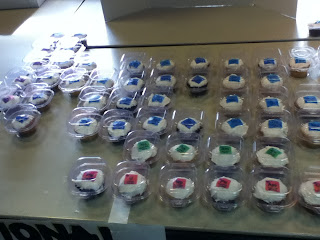 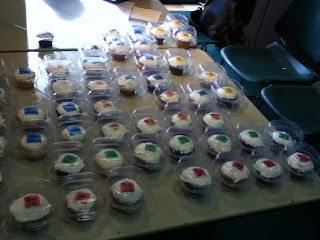 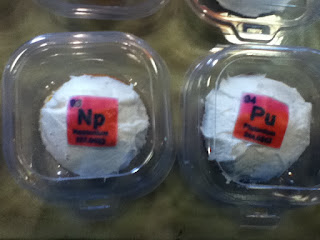 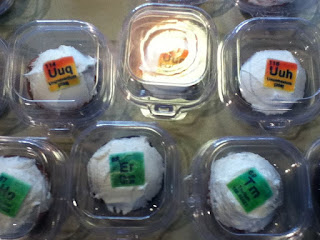 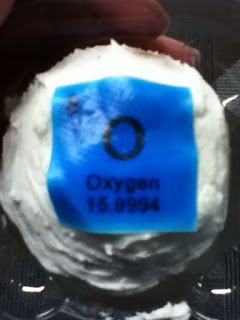 If you came here wanting to see an actual periodic table, here you go: 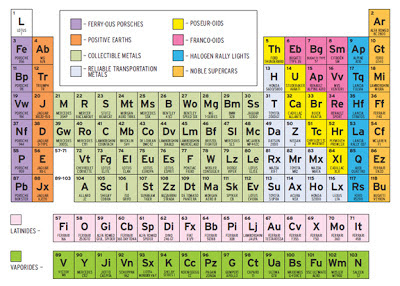 And check out this super cool website that has a video for every single element in the periodic table!  Some have explosions and other fun stuff, and of course the guy with the sweet hair-do. :)   - Periodic Table of Videos
Here's an example, with the video on Sodium (Na):

Also at UVU today right next to the periodic table of cupcakes, they did "Pie Your Professor" for a fundraiser.  I took these pictures with my iPod so sorry they're pretty blurry.
Here's a student taking a shot at (and missing) Dr. Halling: 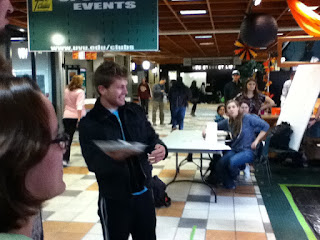 Here are the Chemistry professors- the brave ones have their hoods down.. haha. 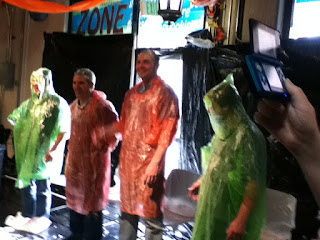 Quite the pile of debris left behind...  these guys are good sports. 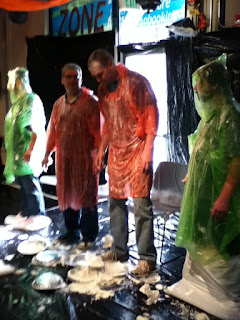 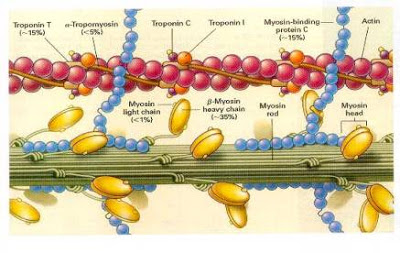 Let's talk about the most amazing organ in the most complex organism on the planet, shall we? :)

Here is a basic orientation:

Brain Stem
The most ancient ("primitive") part of the brain is the brain stem.  This part of your brain is responsible for basic functions to keep you alive.  Includes the Medulla oblongata, Pons, and Midbrain.  First a look at the parts:


Here is a view of a frontal slice through the human brain stem:

Now a look at each part and the centers each contains that help keep you alive in-the-moment.  Things that could kill you in a matter of seconds or minutes if they don't work properly are controlled here.  We'll start with the most inferior part and move up.


Mnemonic from Physiology student - "programming your VCR makes you vomit"

Another cool thing that happens in the medulla:

That is the brain stem.  Next we will continue superiorly.

This system controls your waking state and alertness, sending signals to the cerebral cortex to keep you awake and alert.  This allows you to direct your attention to specific events.  It also holds back sensory info at other times to allow you to sleep, and controls your circadian rhythms (sleep-wake transition).  In fact, if I understand correctly, the RAS has an inhibatory affect on the part of the brain that contributes to sleepiness - the Preoptic Area (POA) of the Hypothalamus.  Likewise, the POA can inhibit the RAS when it's time to sleep.  Pretty cool.
An even more cool fact - this alertness center is very active when awake, and is suppressed during deep sleep, but during REM sleep when you are dreaming, the RAS is just as active as when you are awake! :)

Hypothalamus
The inferior part (floor) of the thalamus.  See picture above, the purple front section on left picture.  Also, the picture below gives a more general orientation.  Here are its functions.

Here's a more detailed diagram of the hypothalamus:


Cerebellum
The motor integrating center - makes last-minute fine tuning adjustments to motor activities, controlling coordination.
Tells "how far, how fast, and when to put the brakes on"
Sobriety tests are really testing the functionality of the cerebellum.  Depends on sight and proprioception (info on what your body position actually is right now) input.  Prevents dysmetria and past-pointing.  (Dysmetria = missing the mark; past-pointing = moving beyond the mark.)

The cerebellum processes input from other areas of the brain, spinal cord and sensory receptors to provide precise timing for coordinated, smooth movements of the skeletal muscular system. A stroke affecting the cerebellum may cause dizziness, nausea, balance and coordination problems.


Cortices of the Brain 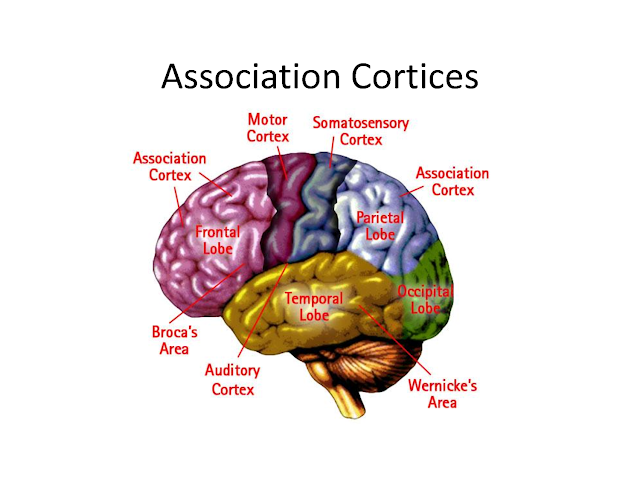 Somatosensory Cortex
Pinpoints location and intensity of temperature, touch, pressure, and pain (general sensations of these come from thalamus, then are passed on here to get more details)
Proprioception


For additional information related to the brain, see these other posts: 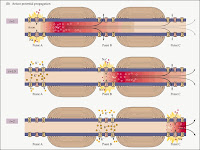 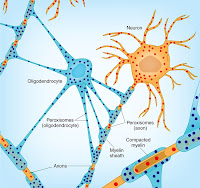 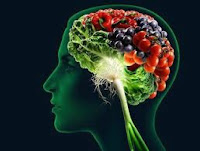