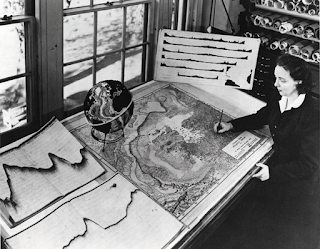 Marie Tharp was responsible for verifying Alfred Wegener's theory of Continental Drift, a key Theory in Geology.  Read all about her in this amazing article on mentalfloss "How One Woman's Discovery Shook the Foundations of Geology".

Wegener's was a theory the scientific community only laughed at when presented in 1912 until all the evidence came pouring in and staring them in the face many years after Wegener's death.  The theory was laughed at, and according to Marie Tharp's recollection, you could even be fired from geologic work for believing his theory.

As an aside, here's a fun video on Wegener


Even when Marie Tharp first showed the evidence - a map she had made from radar data of the sea floor which clearly showed the mid-ocean ridge where sea floor spreading takes place and allows for continental drift - to her colleague in the 1950's, he made her redo all her hard work mapping the seafloor because he couldn't believe it backed up Wegener's Theory and pegged it as only "girl talk".  She started from scratch and came up with the same thing, which also was corroborated by this colleague's own data of undersea earthquakes.

This laid the way for Harry Hess to peg Seafloor Spreading as the mechanism for Continental Drift.  Wegener and Hess are recognized as the fathers of Plate Tectonics in modern Geology.

I'm going to go out on a limb and consider Tharp as a mother of Plate Tectonics!  The only reason she wasn't out on research ships collecting radar data herself for this work was because they wouldn't allow women on ships- it was considered bad luck.  In fact the only way she even got to study geology was because after Pearl Harbor, universities finally opened up their programs to women.  Marie Tharp is not well known, but she managed to triumph over the sexism of the time and is now one of my heroes.

References
This post was spurred by this amazing article, which goes into detail about what Marie Tharp did.  Do yourself a favor and read it!  (Picture also from there)
http://mentalfloss.com/article/60481/how-one-womans-discovery-shook-foundations-geology