I got in my stocking a really cool clear Calcite crystal, and an amazing Bismuth crystal!  I have never seen or heard of these before, they are so awesome!  Here's a pic I got from amazingrust.com.  My sample looks just like this on the bottom.  On top it's like a cluster of pyramids that are beautifully colored. 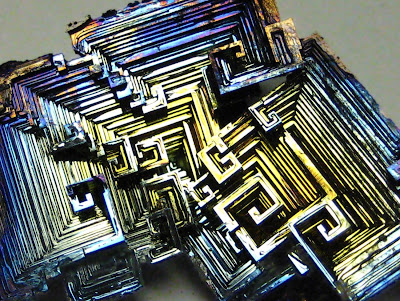 Isn't that cool!?  The outsides of the crystal grow faster than the insides, making it a hollow square spiral.  The metal oxidizes on the outside which is what gives it the coloring.  (Read more about it at http://amazingrust.com/experiments/how_to/Bismuth_Crystals.html).
Posted by Julie Nance at 12/26/2011 12:08:00 PM No comments:

My Brine Shrimp hatched!  And my sister ordered some liquid algae to feed them and it came in the mail today.  They're so tiny and so fun to watch swimming around.  So there are maybe about 10 of them in there.  Hoping we get even more hatching now that we have food for them. :)  I wish I could take some pictures of them but I know my camera won't focus on something that small, so you'll have to use your imagination. :)  So glad I have real Great Salt Lake Brine Shrimp! Woohooo!
Posted by Julie Nance at 12/19/2011 10:22:00 PM No comments:

I love to sit near the window at school as I eat my lunch, and gaze at the migrating birds that often pass through.  The other day I saw a small group of geese majestically flying in a lazy circle.
Last week I pulled into a parking lot next to a small section of grass.  A large flock of birds was chatting away and pecking around for a snack.  Every so often they would all take off in unison, swirl around and land again.  Then swell up and perch on the electric wires.  As each new bird tried to squeeze into an empty spot on the line, its new neighbor would gently scoot over and a wave of nudging would quickly run down to the end to accommodate the new arrival.
One interesting thing I noticed was that the birds "chatted" with each other like crazy while they were on the ground or the wire.  But as soon as they lifted into the air they were silent.  I love to watch flocks of birds flying- it is so beautifully organized and mesmerizing.
Posted by Julie Nance at 12/09/2011 07:57:00 PM No comments:

I live in a bowl-shaped valley.  Which means we have temperature inversions.  A lot.  Especially in winter.  The past several days the ambient air has been so nasty!  It stinks and makes me cough, and may have contributed to the sickness I've ended up with.  To top it off, in my car, the refresh button is broken- you know the little one you push to make it recycle the air when you drive past road kill or you're behind a stinky truck that hasn't passed its emissions test.  That's broken so we have only outside air and it has been so bad.  It's also been bitterly cold.  So I haven't been walking or hiking lately but with the air, I wouldn't want to anyway.

So I wonder- is it always like this and I'm just noticing it more this year since I actually have been out in the fresh air and the mountains more lately?  Or is it worse for some reason?

It makes me want to go hike the Y.  My Environmental Management teacher told us about inversions and how he went on a hike with a friend to the Y when it was super cold, but when they got up to the Y, they got to a high enough elevation that they were above the inversion and it was all sunny and warm up there.  :)  I'm not sure if my lungs could get me there with this icky air though.  Yuck.
Posted by Julie Nance at 12/05/2011 09:05:00 PM 1 comment:

The human brain and spirit

My father had a stroke at the end of June and lost all feeling and motion on his left side.  But he immediately started working on getting whatever movement and strength he could.  In the ICU the first week, a Physical Therapist came in almost every day and held his leg up for him and told him to push his own leg out.  He didn't have much ability, but even then he could use his muscles slightly.
This week I went to help him practice walking- he can pull himself up out of his wheelchair, and move his entire left leg (lifting and placing it, not dragging it as the original optimistic prognosis was) and walk while holding on to the railing in the hallway or even using a walker/cane thing.  We are there to support him in case he needs to sit down or loses his strength, but other than that, he does everything himself.  I am so amazed and impressed by his progress.  It's a miracle of the human brain being able to rewire itself after a massive cardiovascular accident and the subsequent tissue damage to a large portion of the brain.


It is also a miracle of the human spirit- my dad's sheer determination to get his life back as much as possible.  He is so optimistic and hard-working.  I'm so glad that he has been blessed so much.

I'm continually in awe of the human body and it's complexity and sophistication.  When I took Human Anatomy last spring, all the things I learned made me think over and over, "I don't know how anyone could learn this stuff and not believe there's a God."  It's all too perfect and beautifully organized and orchestrated. :)  I find it so fascinating and amazing.
Posted by Julie Nance at 12/02/2011 10:28:00 PM No comments: