Leukocyte (aka white blood cell) Types
Contents (scroll down or click to learn more about each)
*First 3 are granulocytes, meaning they have little granules inside which get released as they are activated
1-4 are nonspecific immunity, the rest are specific 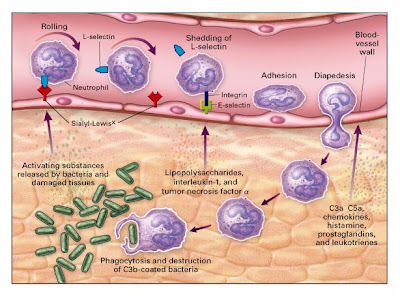 Oh my gosh! I just realized my favorite video is showing this process pictured in the above diagram!  You have to watch this, it's the greatest thing ever, but if you're wise you'll actually view it through this link to the creators' website because it's much better quality.  But just in case you need it, I also uploaded the version from YouTube.


And then there's this 8 minute version which has some things labeled for the true nerds.  And this confirms that this is in fact a neutrophil doing diapedisis at the end. :)  Geek out moment! 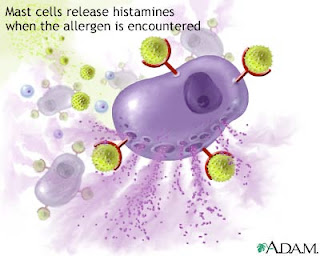 
Macrophages - (grown up monocytes)
The name "macro" "phage" refers to phagocytosis - they are awesome phagocytosers (I'm sure that's not really a word, sorry.  But you get the idea.) 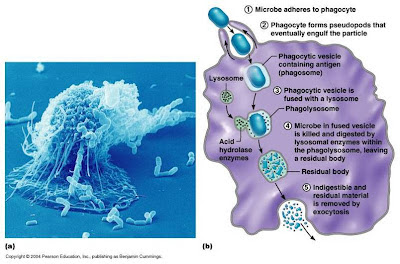 
Antibodies
Immunoglobulins
IgG - most abundant, produced when body is subsequently exposed to antigen
IgA - mucus membranes, all things opening to the surface - breast milk, tears, saliva, etc
IgE - activates mast cells to release histimine
IgM - serve as the B cell surface receptor and is secreted in early stages of plasma cell response
IgD - is found on surface of B-lymphocytes (antibodies)


Sources:
Much of this info is paraphrased from physiology course notes by Dr. Heather Ashworth at UVU
Supplemental info paraphrased from wikipedia and others such as:
http://www.biosite.se/viewpage.aspx?pageid=289
This site has a very detailed and awesome overview of all this stuff, so if you need more info, go here: http://www.pc.maricopa.edu/Biology/rcotter/BIO%20205/LessonBuilders/Chapter%2015%20LB/Ch15LessonBuilder_print.html