Here are the basics of mitosis!  The red and white pictures are from onion root tips, which I took in my Plant Biology lab.  Onion root tips are a very easy and excellent thing to use to study mitosis, because it is a very active site of mitotic division in order to quickly grow.
I hope my labels are clear enough, click on the pictures to see them larger.

Interphase
I know what you're going to say: Interphase isn't part of mitosis.  You are absolutely right!  But it should be mentioned because this is where most of the cell life happens, and it's also where the chromosomes and organelles are duplicated in preparation for mitosis.  In order to replicate, the DNA has to be in its loose form - chromatin.  Here's a diagram where the chromatin looks like a big bowl of spaghetti, or a mess of yarn:

If it were packed tightly into chromosomes, as the diagram shows, it wouldn't be possible to get at the genetic code to copy it.  So, during interphase, it's a bowl of spaghetti.  It will get packed tightly later.

Below, you see a slide of some onion root tip cells, most of which are in interphase.  I've pointed out the nuclear envelope which gives the nucleus a nicely defined round shape.  Also notice the slightly darker nucleolus inside the nucleus. 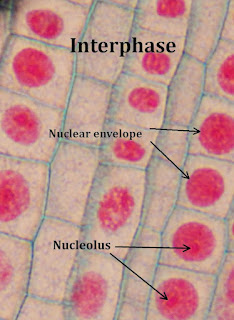 Prophase
Prophase is the first stage of mitosis.  DNA was already duplicated during interphase.  Now is when the DNA gets condensed into chromosomes.  Each chromosome in this phase consists of 2 sister chromatids attached by a centromere.  While they are attached thus, they are considered ONE chromosome.  The nuclear envelope also dissolves so the chromosomes are in the cytoplasm.
Memory aid:  "pro" means before/ in front of.  The first phase!  Also think of "pre" - it's the prep for cell division.

Metaphase
During metaphase, the chromosomes start to line up in the middle of the cell in an orderly fashion so they can separate, and the spindle fibers are sent out to attach to the centromeres.
Memory aid: "meta" - middle - chromosomes are lining up at the middle. 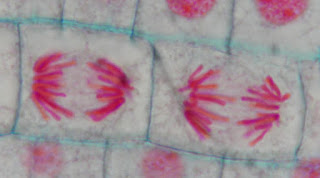 Telophase
Nuclear envelopes being to reform, cell plate (in plants) begins to form. This is done by Golgi bodies which send over vesicles to the middle and those fuse together.  The plasma membrane that makes up the vesicle then becomes the plasma membranes for each new daughter cell.  the contents of the Golgi vesicles become the new cell wall.
Memory aid: "tele" means far/ end.  It's the end phase!  Like telephone - talking to someone on the far end.


It may be hard to read the small text on the above picture, but around the sides of the cell plate, is what's called the phragmoplast.  (Please note, this process only happens in plant cells.)  This is basically a collection of microtubules that are guiding the process of making the plate, as seen in the following diagram:


Cytokinesis
After mitosis, the cell gets pinched off to form the 2 new cells.  That's what's starting to happen with the cell plate in plants.  Keep in mind, the phases are slightly arbitrary.  There's not really a specific instance where you could say, "anaphase is over, now this is telophase."  They overlap a little bit, but it's important to know what happens in each phase and just realize that sometimes the next phase might get a bit of a head start (like that cell plate forming while telophase is still going on). 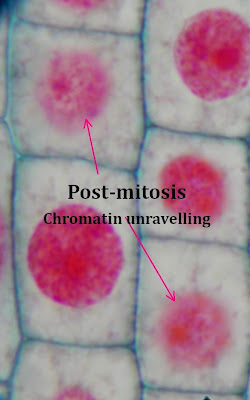 In picture above, the post-mitosis nuclei are lighter colored because the DNA is unravelling.  When it's not as dense, it's harder to see.

I hope that was helpful!  Please leave a comment - I want to know what you used, liked, or any suggestions you have.  You can also join the blog, that would be sweet!  Thanks for visiting, and good luck with your studies!
Posted by Julie Nance at 9/11/2012 10:21:00 PM