I had another fantastic meeting this week with one of my mentors/ exhibit team, Shawn.  Nancee and Mark were both gone.  Shawn really liked what I've been coming up with and said that I've exceeded their expectations.  Naturally that made me feel really good.
He also mentioned the online Free Choice Learning master's degree OSU offers and said this is the type of project it involves, and that I'm doing work just as good as those students.  Shawn mentioned this program several weeks ago and it started the wheels turning in my head.  I'm sure it will stay on my radar as I finish my undergrad and start teaching.
Ever since the meeting I have been hard at work putting together the exhibit proposal.  I've never done anything quite like this, so it's challenging to find the right format and way of doing it.  I'm seeking feedback and advice on it from some folks, so that will help me get it pulled together these last few days.

Saturday was an awesome day working in the Visitor Center to cover for Brian who accidentally signed up for 18 straight days of work (covering for others who had covered for him).  Holy cow, I love the VC!  I got to work at the tide pools and I really love to talk to people and teach them about all the echinoderms especially in that tank.  I love to show off the sea cucumber guts, and point out the sea stars' madroporites.  Perfect for a biology geek like me.
I also got to do Ocean Quest (yay) which I also love...perfect for a geology geek like me. :)  (See why I love it here so much?) 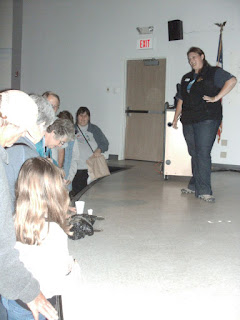 To top it all off, right after Ocean Quest, I was invited by the wonderful Harrison and Kristen (the aquarists) to join them and Diana to feed all the animals, because the volunteer feeder called in sick.  How fun!  Somehow I missed the part of someone asking me if I wanted gloves, so I had stinky hands for a while.  But I didn't care.  It was a cool new experience.  I even got to use the giant pole to feed fish and anemones in the global tank. Sweet.  Something new every day! 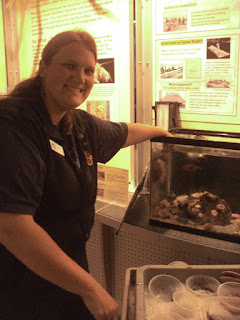 Today was my final shift as a Working Waterfront Docent at Port Dock 1 where the Sea Lions hang out.  For those who don't know, Working Waterfront was started by a group of organizations in Newport including the Port, HMSC, the aquarium, local merchants, and a foundation that has been formed to raise money to repair and replace the docks.  They trained a bunch of volunteer docents and have someone stationed down there 10-4 every day.


It's been a fun adventure.  Today I tried something new at the end of my shift and actually announced a Sea Lion talk and then spoke to the whole group for a few minutes about the sea lions.  I think it went well, and then it led into tons of questions from people.  People don't seem to always know that I'm there to answer questions.  If I were going to be doing another shift, I think I would do this Sea Lion talk about every 15 minutes for the constant flow of new visitors, or just whenever there is a big crowd of people.


So, all that happened just since Friday!  Monday through Thursday of this week was my final vacation with my kids.  We had a blast visiting Crater Lake then heading to Crescent City California to see the redwoods and explore the coast one last time including the stretch from Crescent City to Bandon.  Over this summer we have explored the Oregon Coast from the southern end up to Tillamook (we had planned to go all the way up but ran out of time on that trip).  We've also gone to the west-most point in the state (Cape Blanco Lighthouse), and gone as far east as the Sheep Rock Unit of the John Day Fossil Beds.  Actually if you include the drive to get here from Utah, we've traveled the entire width of the state!  It has been a crazy fun time and I'm going to have a hard time leaving.

So I actually didn't realize this was the final post for the internship folks... so I have to just say that this has been the most amazing experience, and I am grateful to have been a part of such a great program and to associate with amazing people.  Nancee, Shawn, Mark, McKenzie, Becca, Bill, Harrison, Kristen, the bookstore staff and all the VC volunteers, Chris Burns from Working Waterfronts, Eric and Sarah in Corvallis, and so many others, I can't name them all.  You have all made a huge impact on me and I will really miss being around such a dynamic crew.

I have also loved every chance I got to be around my fellow visitor center interns Brian, Diana, and Nick.  I hope we all stay in touch, I am excited to see what you all do in the future, cause you're so awesome!  Brian has so much knowledge and is so patient in sharing it with anyone.  I have picked his brain several times and he took the time to teach me the animals in the touch tank so I would feel more confident interpreting there.  Diana has that amazing announcer voice, and is so willing to jump in and help out and learn anything.  It's been fun to get to do stuff with her like learning to feed, and that unforgettable experience with Aurora the octopus!  Nick always makes me smile with his quirky and friendly personality.  Sometimes when I'm sick of being isolated in the library, I will visit the VC for some Nick-inspired laughs.  Thanks guys, it's been a blast!