I just spent a totally awesome weekend at UVU's Capitol Reef Field Station with my Botany class (Flora of Utah).  We had a group of 20 students, and our two teachers - the Botany Lab Manager Ally Searle and Dr. Renee Van Buren, who is also the station manager.  She is the one who spearheaded the creation of this awesome field station, after 10 years of working and fighting for it.  Check out the website.

Botany
It was a long weekend of botanizing on our way to Capitol Reef National Park, and in the park, and driving from there down to Bryce Canyon (we didn't go in there though, just drove through Escalante and did a couple things in Red Canyon nearby).  So much fun.  Got a bit of a tan, had lots of time to sit in the dirt with a 3" thick Plant key, took a few quizzes, and had a ton of fun laughing and joking with my classmates.  We had a really fun group.  I still need to get my plant families down- I've been working on that with practice and flash cards all weekend.  In fact, I wouldn't be surprised if you find a post about the plant families in the near future so I can practice them more.  We saw some neat cacti and other things that I didn't take pictures of because I collected them, outside of Capitol Reef itself, of course.  (In case you're unaware, in national parks you aren't allowed to collect anything.)  I rode in the van with Dr. Van Buren so I learned a lot.  I was happy to find that she loves Geology too so I got to learn some geology on this trip from both her and Jane.  Speaking of which...

Geology of Capitol Reef National Park
Capitol Reef was named that because it has some white domes of Navajo Sandstone which reminded people of the U.S. capitol.  And it was termed a reef because, like a coral reef to sailors, this huge body of rock was a barrier very hard to get around for early travelers on horseback and in wagons.

Capitol Reef is a giant anticline.  The crust was folded up like a dome or speed bump and then partly eroded away.  As you travel down in elevation along the reef you actually go into newer layers because of how the crust is curved from this deformation.

The Chinle is pretty soft and more prone to erosion than the harder Wyngate sandstone above it, so the Chinle, which has beautiful colors of gray, purple, and green, erodes quickly, causing large chunks of Wyngate to fall off the cliffs.  That's why the base of the cliffs are completely littered with boulders.  It's pretty fun.


The first morning I went out and explored that area.  It's a wash because there are a lot of flash floods that run through the area during the summer rains (monsoon).  I had a blast exploring down there and finding neat trees, rocks and plants.  My favorite was this boulder that looks just like an anapsid skull (turtles have this kind of skull). 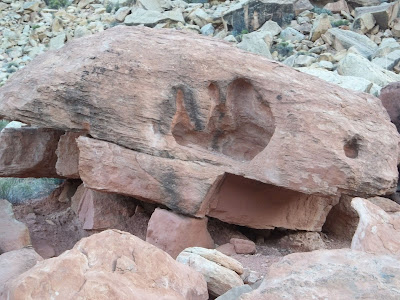 Prehistory
I have finally collected my first fossils!  We went to an area that was covered in bivalve fossils that have been left in a big pile after the surrounding rock has eroded away.  You could just sift through and gather what you wanted, just like beach combing.

I was so excited that this area was outside of the national park itself because that meant I could actually take some of these home- yippee!

Biology
I got bones!!!  My awesome friend (and fellow Bio Ed student) Garrett pointed out some bones on the ground and there was almost an entire deer skeleton (I think it's a deer, at least).  I'll see if I can figure out what animal it belongs to for sure.  This was a great trip for adding some cool stuff to my collection of geek out artifacts... lots of bones, tons of plants, and some fossils.  I wish I could always have a botanist, biologist, and geologist to go with me on all my vacations so I could learn the entire time and have them point out the best places to collect things and such.

As far as live animal life, we saw a lot of birds, lizards, some bats on our stargazing night, a couple of marmots and one pronghorn.  So that wasn't a huge highlight of the trip, but there was plenty of other cool stuff to keep me happy.

Astronomy
As I mentioned we did some stargazing on the first night.  They pulled out the ginormous telescope (holy cow, "ginormous" is in the dictionary now!  It didn't give me a spell check error).  We got to take a look at the craters of the moon and see Saturn!  Wahoo!  So that's my second time in a month getting to see that planet, rings and all.  (We saw it at a ranger program while on our trip in Bryce Canyon, which I still need to blog about...I'm behind.)  Totally cool.

Jane and the interns pulled out their pointers and showed us some stars, planets, and constellations.

They pointed out the curved section of the mane of the lion Leo.

As well as the Gemini twins -  Castor and Pollux.

The best part for me was talking about this best-known constellation: the big dipper.  Ursa Major is the real name of it and this constellation is of a bear.  I never realized before that the big dipper that is so easily recognized is only the tail and part of the body of the bear.  So it was cool to see it in context of the rest of it.  I always used to think of constellations as being very small and clustered.  But they really can take up quite a bit of space in the sky.

I definitely want to take an Astronomy class!  Next summer will hopefully be my chance to take a few fun things that aren't required before I have to leave UVU.  On the wish list: Ornithology, Trees & Shrubs, and Astronomy.  Thanks Renee, Ally, Jane, and UVU for a wonderful field trip!