Hooray for dinosaurs.  Took a little weekend trip to Dinosaur National Monument near Vernal, Utah.  Last time we went there (3 years ago I think), the Quarry was closed due to earthquake activity messing up the building.  So I was super excited to go back to the Quarry this time.  I hadn't been there since I went with my family when I was little.  I have vivid memories of seeing it, and it was much as I remember it.  All those fossils everywhere were a huge feast for the eyes and very exciting to realize it's a ton of REAL fossils - not casts or replicas, and they're actually in the mountain in the actual place where they were originally deposited.

But the best thing is that Human Anatomy (the class) helped me really enjoy this a lot more!  So because of my background with osteology from Human Anatomy, I could pick out and name a lot of the bones.  I love that bones have the same names across species.  I want to go back and re-memorize all the bony landmarks.  I was really excited to find a large vertebra from a sauropod (Apatosuarus), pictured here and labeled with the bony landmarks  (assuming they're the same as in humans).  I was trying to decide if this was thoracic or lumbar vertebra and then I found the costal fovea which made me pretty excited.  ("Costal" means rib, FYI - that's the spot where the rib attaches.) 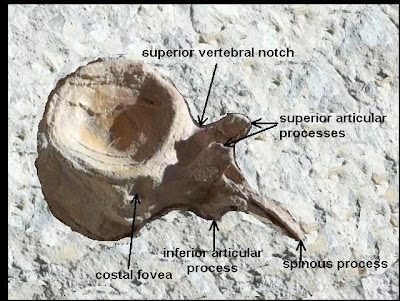 My favorite find (and this was something that I did find on my own) was a well articulated radius, ulna, carpels, metacarpels and phalanges of the front limb of an Allosaurus!  The ranger said that is the only carnivore fossil in the wall she knows of.  It was totally awesome!  Major geek factor.

The ranger pointed out a "butterfly shaped" bone: 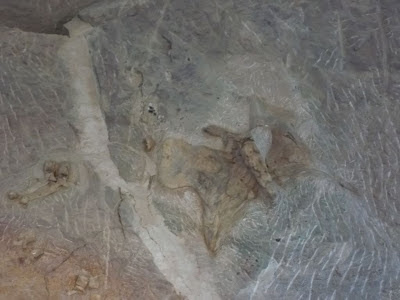 This is the hip bone of the Apatosaurus. It occurred to me that the top part of our hip bones is called the "wing of the Ilium".  So pretty fitting here that it actually looks like wings of a butterfly. :)

My kids got bored with me gawking over the bones for so long.  They thought it was really cool too, they just don't have the same attention span for it as I do. :)  Luckily the ranger was super awesome and had a backpack full of casts and diagrams to help occupy them.

My 7-year-old did tell me last night before even going to the Quarry or museum that he knows what he wants to be when he grows up: a Paleontologist.  :)  Then of course today my 4-year-old jumped on that bandwagon too (he's already expressed a good amount of interest in it though - and really, what boy doesn't like dinosaurs?).  We'll see if that pans out for either of them.  I would definitely approve of and encourage it.  Even if it doesn't end up as a profession for them, it's awesome to learn about.
Posted by Julie Nance at 2/20/2012 11:01:00 PM