I walked up to Dry Canyon yesterday from my house and back, plus explored a couple of the trails up there a little bit.

Geology
I was perusing the map at the trail head and noticed that there are a bunch of cirques on Timpanogos Mountain.  I don't know why I never realized this before.  When I went to the Grand Tetons last summer, I was totally geeking out about the fact that there were cirques, hanging valleys, and horns RIGHT THERE - all the stuff I learned about in Geo 1010 and there it was up close and personal.  Well turns out I have those things in my own back yard.

My 7-year-old and I took note of weird stuff we saw and tried to figure out how it happened.  A lot of the grass/ straw up there is flattened and I was wondering whether that is done by snow or animals or something else.  There was definitely a lot of deer poop around, but it seems too widespread to be done by animals - I'm guessing snow.
Then we came to these odd divets on the side of the trail: 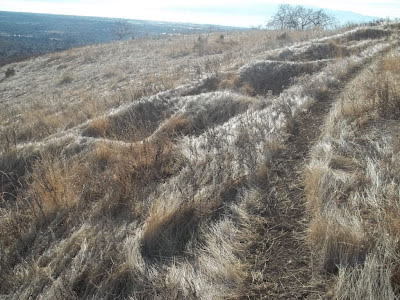 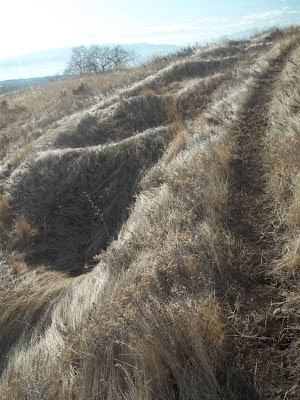 What the heck?  I'm sure when someone clues me in, I'll smack my forehead and feel dumb, but at this point I have no idea what these are from.
Today while driving around, my boy said he thinks he knows what those indentations are- cirques!  Cute and obviously wrong, but I was so proud of him for actually remembering what a cirque was that I had just taught him yesterday (a little valley carved out by a glacier) as I was geeking out at the map, and he related it to something else he saw, trying to make sense of it. :)  Happy moment for a science geek mom.

Botany
I noticed a crazy looking plant off the side of the road and went to check it out and of course take some pictures. 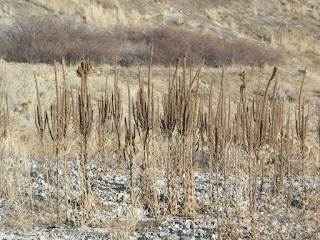 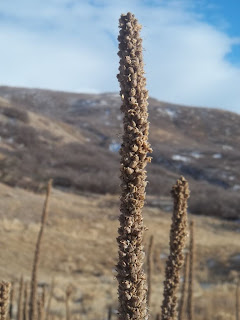 I also saw a sad-looking version of what I grew up calling "Mormon Toilet Paper". 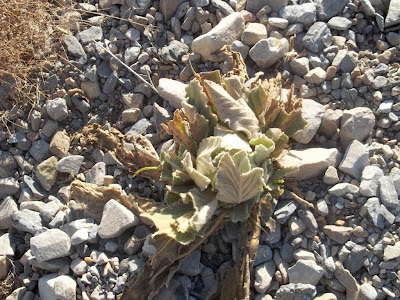 It turns out this plant is called Common Mullein (Verbascum thapsus), and the crazy tall flower stalks are the same plant.  The short soft version is what it grows like the first year, and the flowering version with the tall stalks (which my son related to cacti), are the 2nd year plant.  It dies after two years, but as you can see it is covered with tons of seeds so it is a pretty noxious weed.  Here's a nicer-looking picture of it: