Deer Carcass - Determining the Cause of Death

I was wandering around the Dry Canyon area with my boyfriend and we ran across some awesome stuff.  First off, we found a partial skull, which I of course kept, and not far off, we found a mule deer carcass!  There was fur everywhere and even looked as though the animal had been dragged to a more protected area in the bushes, as you can see in this picture:


However, it didn't appear that any of the bushes were broken from the animal being dragged in there, and the way the animal was prostrated (particularly the position of the front limbs) didn't seem to indicate dragging but almost rather that it had laid down there.

So, obviously I'm no expert in forensics or animal behavior, but it was fun to try to guess how the animal died and how its body came to be where and in what condition it is.  Did it die of natural causes, and was later ravaged by scavengers who tossed hair to and fro so the surrounding area is littered with it?  Did a predator kill it and drag it out of the way?  Could it even have been a cougar cache at one point?  Let's look at each possibility.

Cougar Cache
There is evidence that could be consistent with dragging a killed animal to a safer place.  However, there is no evidence that any attempt was made to bury or cover it as cougars usually do with their caches, as in these pictures: 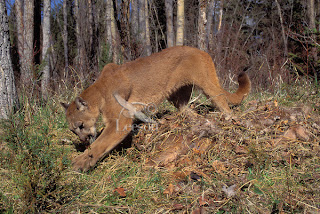 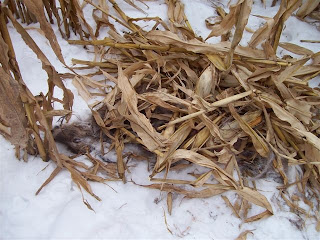 There also doesn't seem to be a lot of blood soaked into the fur of the animal as would be expected if it had been killed by a predator.  I would think the neck would be covered with blood if a cougar had brought it down.
Based on the evidence and that information, my conclusion is it's definitely not a cougar cache.

Another Predator
Perhaps a coyote or even dog brought down the deer?